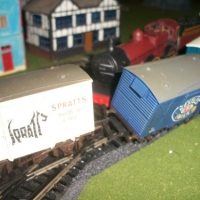 The attached video is for entertainment purposes only; any political references are merely germane to Russia when I visited it back in 1964. What if there was a trailer to a Soviet film in '64? Might it look like this? Also, a chance to slide in some of my interest in paleontology. The concept of cloning an extinct species, such as the Wooly Mammoth is intriguing, however, the eons of thaw-freeze cycles has rendered DNA from that period useless, in such regard. I have heard tell of an effort to reintroduce the extinct auroch to Europe. Hah, hah, good luck with that, they were enormous and quite aggressive. Video features some unusual use of Jouef, Electrotren, and Kleinbahn.