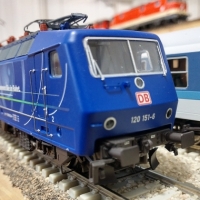 I received this BR.17 locomotive from my son for Christmas. I just got it due to the USPS being so backed up.
After extensive internet digging, I found that he purchased this model on e-bay for $150. As thoughtful as this gift was, I can't run Märklin on a DC/DCC layout. I have not heard back from the eBay merchant yet about a return so I am offering it here.

When I opened the outer box, I thought it was brand new. It doesn't look like it's ever been out of the box and the little parts baggie is intact with two small pieces that I think are rod guards or guides or something particular to steam locomotives. All paperwork is included too.

This model dates from 2001-2002 according to the Märklin web site. It is equipped for conventional, Digital, and MFX running via DIP switch settings under the top of the tender according to the instructions.
This is being offered as used because of it's age, but it is actually NOS and don't believe it has ever been out of the box.

Ask questions if you like. I don't know much about Märklin or steam engines in general, but I will try to answer any questions you might have.