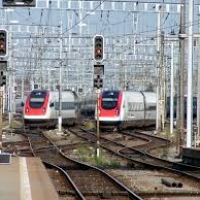 I have been a model railroader in some form since 1970. I have modeled in HO, N, and Z scales/gauges and have preferred HO over most of those years. In 1997, I started what became NCrails.com (formerly www.SouRwy.railfan.net) which was and is currently devoted to modeling the Southern Railway System (US). I broke in my fine modelling chops custom building HO scale high nose SR units. My favorites were the EMD GP30, GP50, and SD40-2’s that graced the central and western parts of North Carolina prior to the Norfolk Southern merger in 1982. I still have a great stash on HO diesel detailing parts.

Photos of my largest and most complete layout (1993-2011) can be found here: https://ncrails.com/wnc/.
2012 was the year I made the switch from analog to digital controls.

In November 2015, I purchased my first European locomotive in HO scale: A Fleischman 145 (145 023-6) 120 Year Anniversary (the Rasender Roland - Speedy Roland unit). Since that time, I have developed a fascination with European trains and models and have amassed a nice collection of Roco, Trix, and REE locomotives and train sets. Additionally, I have high end models of US intermodal, tanker, and passenger trains. As I convert more to European modeling, I’ll be thinning that collection of locomotives and cars. So if you need any US models of more current rolling stock, let me know. Most of those pieces will be listed FS on my website.

In 2018, I relocated to Western NC (WNC) and have graded an area behind my house that will be the new home of my 400 square foot European and US modeling efforts. I particularly have visions of my SBB passenger trains snaking through snow covered floor to ceiling mountains connected by picturesque bridges and narrow passes.

I most enjoy operations so I’m not a stickler for prototypical switching jobs but favor fast, long trains running through finely created scenery! I also have developed an interested in craftsman kits made of castings and laser cut wood & paper.

In conclusion, I’m here to connect with other modelers and support Rey’s efforts to keep us well stocked and supplied with trains!